Confessions of an English Doomsday Prepper

I want to confess as it is good for the soul, Tim and I didn't just come here for the sunshine.... we are seriously worried about the unsustainability of the present western economic system which dominates the world. It feels a bit embarrassing to mention it, like saying I follow David Icke or I am a Scientologist. In my head, saying that I have strong environmental concerns makes me a yoghurt knitting hippy but I increasingly believe that  it is no longer 'if' the system fails but 'when'.

Tim directed me to a YouTube film here Life at the End of Empire which confirms many of my concerns. It is two hours long but worth watching and packed with information. One of the messages I took away from this film was that the current Govt. are not going to do anything significant to avert the impending crisis because it is the maintainance of this current system that gives them their money/power and short term greed outweighs any longer term behaviour for the greater good.

In a previous life I was a Scientist and later worked in the Environmental Statistics Dept. of the UK Govt. Amongst other things I helped to publish global and UK environmental and carbon emission data. It soon becomes very obvious that however you play with the numbers or whatever Emission Trading Schemes you set up, none of it is actually going to reverse the damage we have done, and continue to do  to the planet.

All of these concerns led Tim and I to the decision that we would relocate to a house with good land, a water supply and the best chances of sustaining ourselves and our families if we had to. We are effectively building our lifeboat here, the roof is a little leaky and the boat is unstable but it is the best we can do for the moment. Of course we prefer this lifestyle, the food tastes better, we are both healthier doing increased manual labour and the people here are wonderful. It is hard work but fun.

Like so many people we are still tied to the current economic system, we have debts and a mortgage, which means Tim still works in the UK and flies back and forth. We can not yet do without the system that we no longer support. There is good news though, we are investigating the possibility of Tim dividing his time 50:50 between Spain and the UK.

George Monbiot the environmental and political writer announced some time ago that he felt it was too late for carbon emission reductions to work so we should concentrate on survival tactics. Contemplating the end of the age of excess and cheap oil, and the possible results of climate change is initially frightening but we have no choice but to get on with life and make the best of it. Taking action is empowering and the time to do it is now. Tim and I are planting our forest garden, saving money to install a system to harvest and store our roof water. We are trying to get our cooking and heating needs from firewood and we plan to plant up our willow coppice next winter. I am currently planning and planting tree shelter belts for the garden and we will garden organically, mulch heavily, feed our animals off of our land as much as possible in order to reduce the effects of climate change on our food production.

In this blog I want to show the delights and pitfalls of living a more sustainable lifestyle in Galicia. It really is a good way to live and most of my posts will reflect this, but underneath it all there is the lurking horror of how we (humankind) have raped this planet and defiled Nature. We will all have to pay for our sins in the end. If I were American I would have grabbed my shot gun and headed for the hills, being English I prefer to drink tea and eat cake whilst contemplating the dawn of a new day. 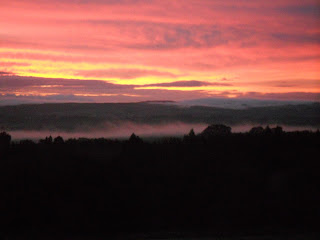 At last, 2 or 3 days of mild weather, the occasional blast of sun between clouds and the bird song is wonderful to hear. My crocus are in full flower and I am madly planting seeds as fast as I can to catch up. One of my many weaknesses are for pan de chocolate and the plastic containers with appropriate ventilation and drainage holes, make superb seed trays with built in lids. I save my yoghurt pots to use as flower pots as the price in the shops is ridiculous. 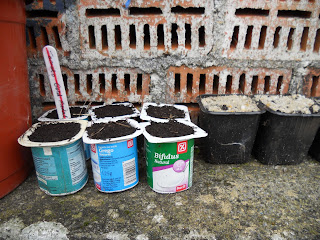 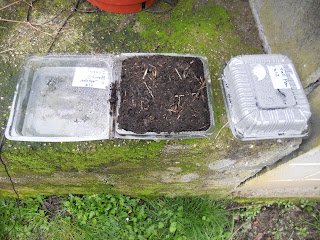 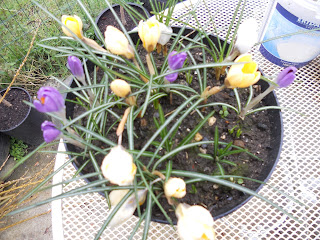 In Galicia most rural houses have an 'hórreo' which is a grain store typical of the region. They are protected by law. The As Petas hórreo is a modern version on the site of an older one but it makes a brilliant plant nursery as it is high and shelters the plants. The slits and air bricks let the drying breezes through but keep vermin out. Typically they have a cross on the roof at one end, and in our case a pyramid at the other, a pagan symbol asking all of the gods to keep the contents safe as the family would depend on the contents for food for themselves and the animals over winter. There are several theories as to the origin of the design but it is commonly thought that they date back to Celtic times with the Romans making some later adaptations. 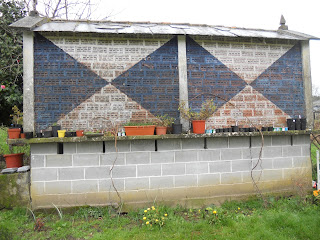 Monty says that there is nothing like a cup of tea on a cold day.This is the wild kitten, now full of the joys of life.

Snow started to fall on Sunday and carried on for around 24 hours. On Monday afternoon the sun came out and Galicia looked beautiful. 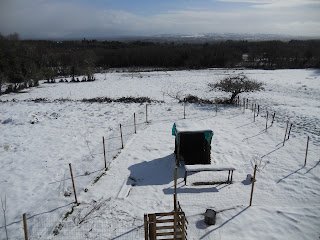 I am very glad I have a good store of firewood in. The hot water heater is currently on the blink again but it will be sorted in time. Luckily a good friend has offered me the use of her shower when I smell so strongly the Billy goat won't come near me! 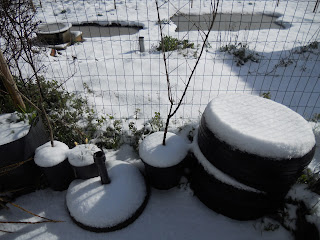 Tim & Nicky Jarman
A small village in the province of Lugo, Galicia, Spain
Two middle-aged and rudely unfit townies, trying to make a go of smallholding in Northern Spain. We are learning and practising permaculture, developing our forest garden and raising a variety of poultry. We are trying to rediscover all of those skills our grandparents had.