We have five mad little Muscovy ducklings, our first and they are very cute. They are fairly independent, just needing mum for warmth between feeds. I hope to get some pictures on here in the next few days. We also purchased two turkey poults at a local market which are settling into another stable. They appear to be standard bronze turkeys which is ideal for us as they taste good and mate naturally. Male double breasted birds are unable to mount females so they have to be artificially inseminated which seems to be a crime against nature. We are now looking for another couple so we have one to eat and an unrelated trio left for future breeding. Once they have settled down we will build them an outdoor run so they can behave naturally and still be safe from the many Galician predators. 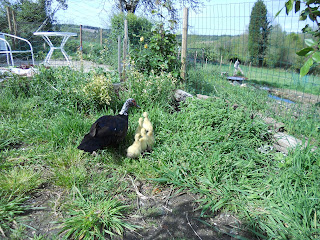 I also have a broody hen sitting on more eggs and two duck nests being filled with eggs prior to further brooding. It will be a difficult balancing act to control duck numbers, quite why the world is not knee deep in muscovies I am not sure. We plan to keep our core flock of 1 male and 6 females intact and eat or sell/give away everything else. Any less than 6 females is bad because the males are well endowed and mate frequently, females have been known to die from too much attention.

Finally Tim has secured another contract which is brilliant news in many ways. He is off to central London on Monday for as long as they need him. Obviously I shall miss him and will be advertising for a bed warmer locally as soon as he is gone.
Posted by The Hairy Ranter at 11:13