I kept getting excited by early signs of Spring but I am still waiting for any sign of warm weather. I take heart from the fact that the weather is warmer here than the UK (not very difficult) but the almost continuous rain just drags on. The Galicians are not very happy either. I haven't seen any potatoes being planted, normally they are in by now. Vegetable gardens remain neglected all around, little ploughing has been done and the land sits with puddles on it and full drainage ditches.

I am also having problems with rats here. Although I haven't got any in the living areas of the main house they are in the stables (the ground level floor of the house) and in the loft. I hear them scrabbling and squeaking at night. I am reluctant to use poison as it kills predators and might possible kill my own cats. The trapping is only partially successful, my eldest cat does his best but I only see evidence of the occasional rat kill, usually the corpse, or part of a corpse in the sitting room. I therefore decided to have another try at keeping a dog. I found a perfect litter of mixed breed puppies at the local Sunday market. They were 30 euros each and were described as very small. I think there is some Yorkie in there somewhere. We have called him Sam, he is two months old and has made a great start. He has shown no tendency to chase livestock (unlike my other previous hooligan pair). He sticks to me like glue is biddable and so far I haven't had any problems, there is of course still time for him to develop bad habits. 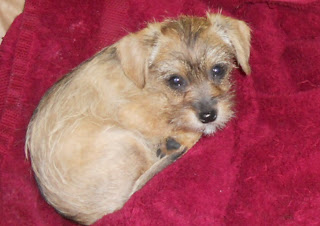 I hope he will in time become a great ratter. Finally yesterday we said goodbye to the male goat who returned reluctantly to my neighbours. Pepe who is 86 came for him with the usual loop of string. The goat ran madly round the stable as though it was a 'wall of death' bouncing off the walls. Pepe flung himself at the goat and finally secured a leg. He was nearly knocked flying several times. Finally Pepe won and dragged him out of the stable. Somehow I can't see Pepe sitting in a nursing home with a cup of coco for a few years yet. Assuming that the goats are both pregnant, they should be due to deliver around the middle of July, very exciting times for us.
Posted by The Hairy Ranter at 13:01