We sat in front of a log burner watching the fabulously cheesy Van Helsing movie, drinking port and toasting our dearly departed. I had carved one of our sweet dumpling squashes which was glowing in the window and for those few hours we forgot the awfulness going on in the world. 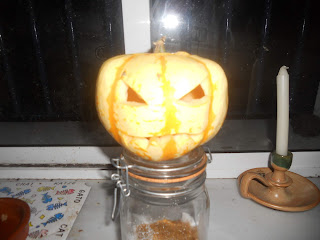 Autumn is proving to be as fruitful as ever. We are eating parasol mushrooms for breakfast most mornings. Chestnuts roast on the woodburner for nibbles and we continue to pick ground cherries, our last cucumber and tomatoes from the polytunnel. 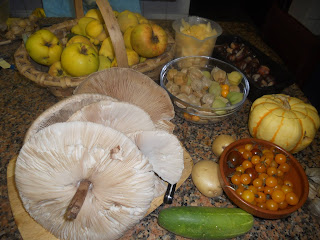 I still haven't decided what to do with my basket of quince, compote is nice, I have made membrillo before but with Tim's diabetes, a lower sugar method of preservation might be a more sensible approach. The lettuces are almost ready to start using and my late planted peas are now in flower, the green beans continue to grow. Only time will tell if I get a crop from them over winter. 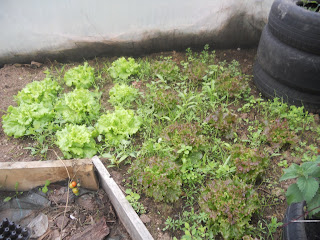 As usual the tyres have come up trumps and the kale and chard are looking good so far. Fingers crossed that a snail doesn't come and massacre them all (it has happened before). 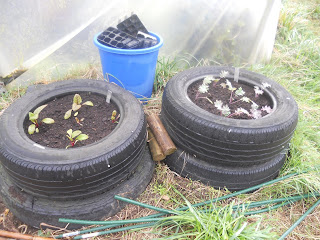 Tim and I have spent the last week between downpours of rain trying to prepare the veggie patch for next year. When I was ill it was left untouched for eighteen months and the result is thick tussocky grass and brambles. We have covered as much as we can with the available chicken poop, mulched with cardboard (until it ran out) covered it in a layer of barley straw and then covered the lot with plastic weed suppressant material weighed down as much as possible against winter storms. 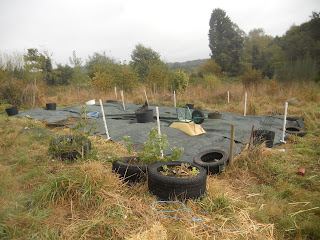 If left for a minimum of 6 months we hope to uncover it to reveal a weed free fertile veggie bed perfect for sowing straight into. Obviously the reality may be otherwise but as ever in small holding, hope is everything.
Posted by The Hairy Ranter at 11:25