Unfortunately the sheep didn't work out this time. There were six hungry mouths and our secure areas got grazed down quickly and the other larger areas which are less well fenced and/or contain delicate shrubs and trees were escaped from, or the entire contents were eaten down including our rarer trees. The senior ewes had been raised with goats, and like goats they had a taste for trees and shrubs and were happy to stand on their hind legs to reach everything below six feet high. They were also adept at leaning hard on our fence posts, some of which gave under the strain allowing them unfettered access to the out of bounds areas including our neighbour's hay fields.
All this meant that we had to supervise them constantly which wasn't going to work out when Tim started work earlier this week. Luckily a friend knew a farmer with a flock and he took them all to join his gang and I have no doubt they are enjoying their company as we speak. Buster the ram's future is less certain, if he doesn't get on with the resident ram one of them will be next weeks dinner but he was originally a meat lamb so he has had an extra year of life, sex and rock'n'roll. We will have a couple of lambs again to fatten on our land but we now know we don't have enough grass to run a flock year round so lesson learnt. Also 'goaty' sheep are much more destructive than innocent run-of-the-mill lambs which are so much easier to manage. 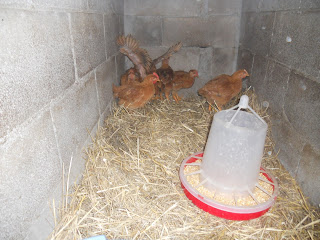 After the sheep went we moved forward with our plan to raise our own meat with a batch of meat birds. We have eight rubia pollos and they will enjoy the delights of our orchard for most of the summer. We avoided the white Cobb hybrid birds as the poor things grow so fast that they can barely walk and they just sit and get huge very quickly and have to be slaughtered at around 8 weeks old as they go off their feet and have heart attacks due to their size. Another example of man breeding animals for his own use and ignoring their quality of life. At least the brown birds we have will be able to walk, forage and dust bathe and we will let them live until they start to struggle with their weight at which point we will kill them quickly and humanely here on our small holding.

On a cheerier note the weather is all over the place, up to 30 degrees C for a couple of days and now back to single digits but the flowers are blooming, the birds are singing lustily and the veggies are sprouting madly. Nature's bounty brings such joy. 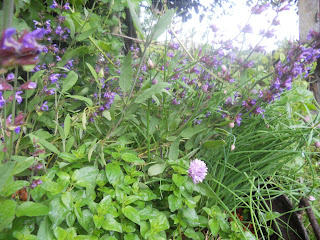 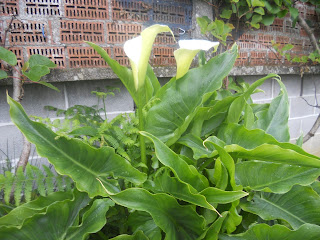 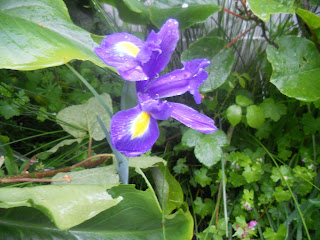