Our latest batch of chicks were hatched under a puzzled duck who was a model parent for the first couple of days but she swiftly lost interest when the chicks became noisy and undisciplined. One of them had problems from the start. It was very noisy and seemed to have its head stretched over its back and was uncoordinated running in clumsy circles and falling over a lot. My daughter and I hand fed it and kept it in an incubator for a few days. It is very difficult to know whether to let nature take its course and watch something die over time or whether to intervene, either to humanely kill or feed as we did.

She was called Chicca, she became very tame, she got much stronger and progressed to spending days with the other chicks and feeding herself as her neck straightened and balance improved. Eventually she lived with the other chicks permanently. Unfortunately one day she and another chick broke out of the stables through a tiny hole at the bottom of the door when we were out and she was killed, probably by a duck. Not a good outcome but we felt we had given her a chance. Sometimes that is all you can give them. 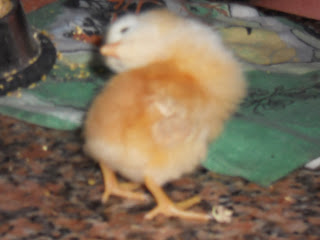 The hard work continues. We have finally had our fire wood delivery. Catherine and I managed to load it all into the shed in a day and a half. We should be warm all winter. 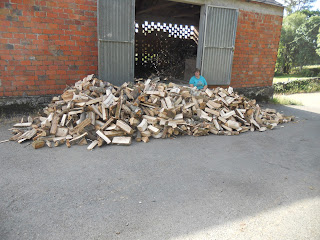