We have a new cooker which has just been installed by two lovely gentlemen. Tim is here with me to see it done (and pay for it) and we are both excited because it feels like a major step forwards. We have chosen a traditional 'cocina economica' wood fired with a vitreo-ceramic top for easy cleaning. It is the modern version of the cooker it replaces which has been here since 1927.
The old one looked like this and was so rusted through that it was impossible to repair. 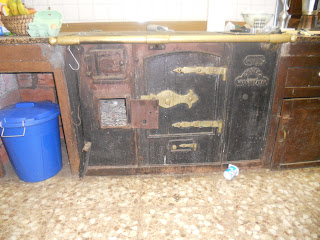 They are actually built into the island and surrounded by bricks providing a large thermal mass so that once heated they stay warm for hours and are very efficient. The chimneys go under the floor at the back and up the back wall so that every bit of heat is retained in the room and walls. This does mean that putting a new one in is a big job as the brick surroundings have to be demolished and rebuilt around the new one. 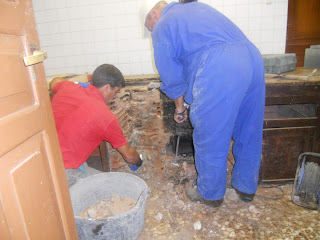 The job took two days as they excavated the underfloor bit, lined the chimney as they went and put in a new vent to control the airflow. 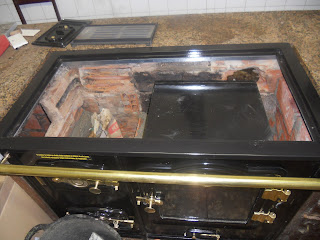 This morning we are going to make tea and coffee on our new pride and joy. 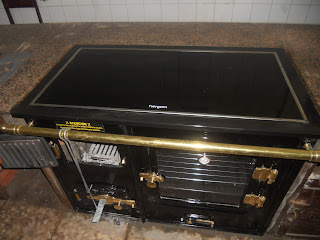 The kitchen really is the heart of the house and now we will have a warm room to work in, dry clothes and herbs, brew beer, prove bread and cook any number of stews and soups. The next stage pencilled in for next year is to built a wood fired summer kitchen outside under the large porch so that we can dispense entirely with Butane gas for our cooking and heating needs.
Posted by The Hairy Ranter at 08:17