I haven't blogged for a while but busyness got in the way and a succession of disasters included a minor car crash necessitating car repairs. Autumn has definitely arrived and we are madly harvesting chestnuts, parasol mushrooms, apples and drying seeds for next year. The poly-tunnel has been a great success, I got the dreaded tomato blight which meant I had to rip up most of the tomatoes but I still have one producing small salad tomatoes (thanks broad ripple yellow currant). 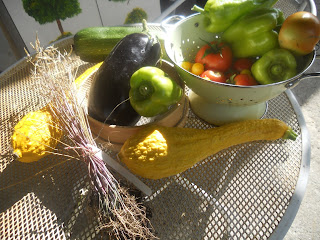 I have had a succession of family members staying which is great and ensures days out and great company. Tim is still looking for the remote working job which will allow him to work from here but they are few and far between. Most employers still prefer to stand over their employees with a whip. 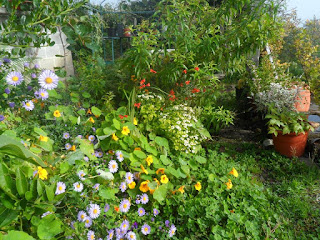 I have discovered that the evil spanish mole-rats eat horseradish root from below, I will have to move the pitiful remnants to a tyre tower standing on concrete and hope they recover. The trees get bigger every year, we have had our first crop of quinces which are waiting to be turned into membrillo. The asian pears have also produced a bumper harvest. For the first time I have a decent chilli crop, all still ripening in the poly-tunnel. We had a huge glut of melons all ready at the same time, over a dozen. Ditto the butternut squashes which were real thugs but at least they store well.

Most of the turkeys have survived, I have four left of the six I started with which all happen to be male so no mating pair this year. The ones I lost all flew over the high fence and got killed by the dogs. Although clipping a wing was an option it still left them vulnerable to attack on the ground, on the rare occasion dogs got in despite our best fencing efforts. It is remarkably difficult to make an area of uneven ground dog proof when the small terrier can burrow under fences and the large bulky dog can leap over 1.5 m fences like a gazelle. 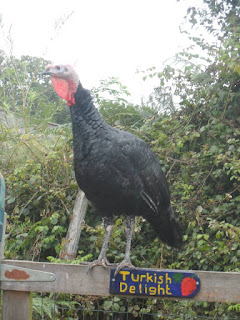 The next residents of the orchard, now that my dreams of a breeding pair of turkeys is on hold, is a trio of Toulouse goslings. Luckily they have been sexed for us, one male called Gandalf and his two women Gloria and Gwen, and despite  an attack of the snotty sniffles are now looking healthy and hooty and as soon as they are big enough they will live in the horreo where the turkeys currently reside. The death date for the turkeys has been arranged as I am determined that they don't get to the monstrous size that they did last year. 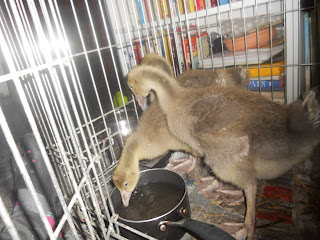 This is our second try at geese, the previous group were home hatched and proved to be too aggressive to live with humans or their fellow chickens. The Toulouse are renowned for being less aggressive and they will be living separately from the other poultry in the fenced orchard and I hope they will also prove to be less vulnerable to dogs and good grazers. Only time will tell.
Posted by The Hairy Ranter at 11:17