Tim is coming home for more than holidays and it has made our year. He has been working in the UK for four years out of necessity and after many tries he has been offered a job which will allow him to split his time between the UK and here. It has been hard on both of us but now he can take part in the many activities that Galicia has to offer such as Fiestas, animal care, barrowing muck, banging in fence posts, and many others. Talking of banging in fence posts Catherine and I are making tree guards for the many trees and shrubs in the forest garden so that we can get a couple of sheep in to graze it and keep the grass down and we will have meat for the freezer at the end of the year. 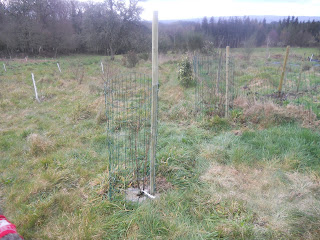 Making them ourselves means that we can vary their size according to the type and size of tree or shrub. We hope to get the worst of the brambles cut down and then the sheep should eat any soft new growth that they make. It will also protect the tender trees from the beaks of the geese. 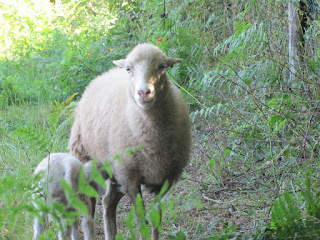 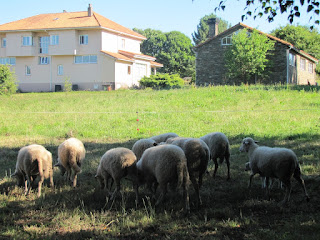 The sheep will be from the flock shown here, they are native Galician sheep, a small breed which are known to be hardy and able to cope with rough grazing. The weather here continues to be very variable but Spring is marching on with bulbs in flower, the usual egg glut and a frisky Errol the cockerel.