It is nearly the summer solstice or Alban Hefin as druids would say and the days are idyllic. We have had some showery weather recently which is great on one level but it just adds to the rampant growth which is beating me this year. A mix of ill health and a chaotic lifestyle, with Tim and I flitting between the UK and here has left the place lush and overgrown. I sit under the porch and a mix of flowers and weeds, nettles, brambles and arum lilies meet my gaze. The scent of mint crushed under foot, californian lilac and roses who are also fighting their way to the light, is wonderful. The fruit is really getting going now, loganberries are on the breakfast menu and jostaberries will be if I can keep the blackbirds off of them long enough so that they can ripen. You have to admire the fecundity of Nature at this time of year. 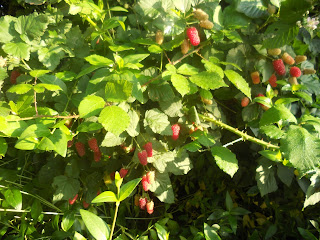 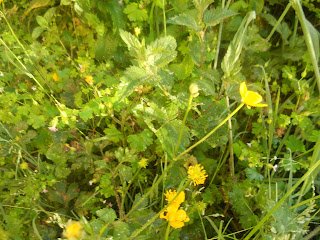 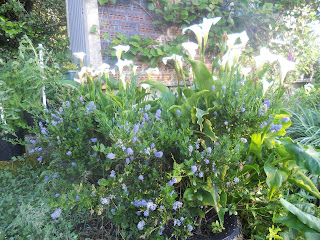 Pears have set well but I haven't found any baby kiwis that have set yet. Several species were flowering well including our full sized male kiwi so there is still a chance that we might get something later this year. The foliage is so dense that it is hard to get a good view of them so I remain hopeful. 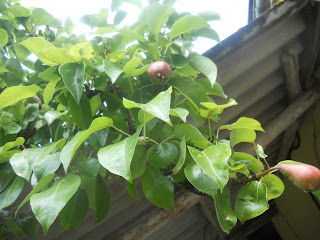 The snail war continues, one of my tyre towers clearly has a hidden population of them. I have planted 5 courgettes there one after the other and each time the hapless plant disappears over night, with just a chewed stump remaining. This is despite a beer trap, egg shells and coffee grounds strewn around the hapless plants. Perhaps a guard duck chained to the said tyres might work?
Posted by The Hairy Ranter at 07:58