Galicia Is The Best

I have been back here for nearly a month now and I have to say Galicia rocks! Cancer makes you appreciate the good things in life. After fearing that it was all going to be taken away there are so many good things here. My Galician friends are fabulous, always asking after my health and just saying I am fine is not good enough, they ask again "How are you really?" They care and that is very special. There are so many friends who have helped Tim and I, from running us around to taking Tim into town, lending us freezers and looking after the place. Thanks guys, you know who you are.
Cancer wise I am still in remission, I am being monitored every three months for signs of it's return. The reversal surgery went well so I now produce waste the same way as the majority of people do. It was very rough and painful at first but now I am getting into a sort of routine and although it will never be the same as it was before, I can live happily like this. Hello onions and salads, how I have missed you. Lentils will be phased in at a later stage but now I can eat almost anything. 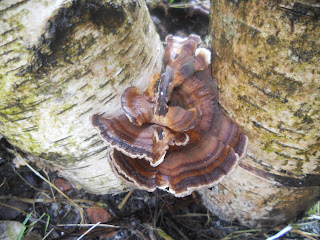 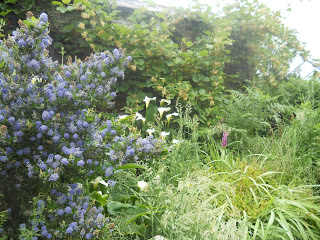 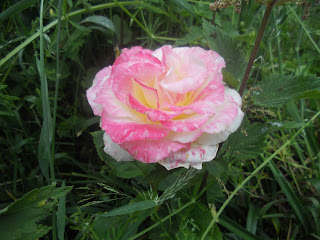 Petas is looking awful or stunning depending on your point of view out of this small window. The grass, wild flowers and brambles have completely taken over but the green lushness is amazing. We haven't fought our way into the forest garden as it is blocked by head high growth but trees appear to be thriving. Veggie patch? What veggie patch? Shrubs are blooming, fruiting trees and kiwis have been full of blossom. The poly tunnel has a small cultivated area but the rest is bracken fronds and weeds but we dutifully water the cultivated bit. The lime, mandarin and nectarine look good in there. We have more chicks, eleven of them the darlings of their mother's eye. She is in heaven with her little ones orbiting her feet as she clucks reassuringly. For this year we have mostly given up trying to tame the wilderness. We know a man who will brushcut and strim for us and so we will be hoping he will rescue the worst of it. I still can't lift anything heavy and I have developed an incisional hernia so probably another op needed to fix it. Tim continues to work hard during the week and we are indulging ourselves at weekends because we more than anyone know that life is short and you have to enjoy yourself when you can.
There is always next year....... 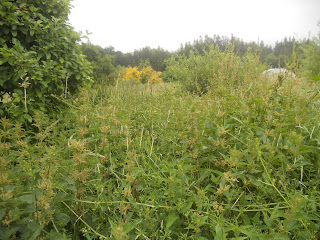 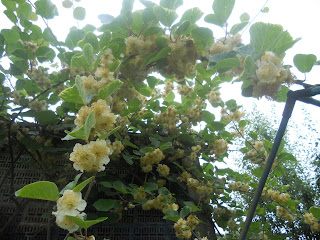